Reliance Jio has increased the tariffs of its prepaid unlimited plans following Airtel and Vodafone Idea. The new base plan now starts at Rs 91 instead of Rs 75 and offers 3GB of monthly internet data and 50 SMS – all with a validity of 28 days. It is still more affordable than the base unlimited plans offered by Bharti Airtel and Vodafone Idea (Vi) at Rs 99, respectively. 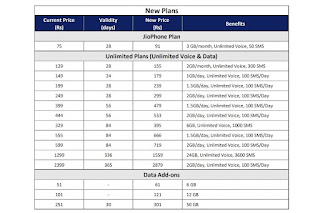